Many people tell me that they love their job, so they don’t want to save up any money. They are happy to spend everything they earn.

When I started working, I noticed that many people had this attitude. They said they loved working and they envisaged themselves working for the rest of their lives. With this carefree attitude, they took on mortgages, got married, and had multiple children. They assumed that their salary would be there forever, so they behaved as if this were the case.

Then the organization I worked for announced that, due to the 2009 global financial crisis, there would be job cuts. A spill and fill was performed and about 40% of people lost their jobs, and many of the people who lost jobs had huge mortgage debts and multiple children.

I don’t know what happened to everyone who got fired. Many of them were old, which makes it less likely for them to find another job. Some were able to get other jobs, but they mainly just grabbed onto whatever they could find because they were desperate for some income to feed their children and pay for whatever obligations they had.

I remember when I started working. I was enthusiastic and passionate. I had just finished university and was entering the workforce for the first time. I thought I would work forever as well.

After the restructure, I realized then that even thought I started off loving my job, the downturn in the economy forced management to fire people, and the working environment became toxic as a result.

Things change, and you must be prepared for change.

Your circumstances today will not necessarily apply tomorrow. The only constant is change.

It was after this painful incident that I realized that I needed to save up and invest. About six years later, I am still working at this organization, and the horrors of the past have been forgotten, and people are once again telling me that everything is fine, the economy is great, that I should get a mortgage, buy a sports car, etc.

But I know from experience that things can change quickly.

This is why you must save money. You must be prepared for change.

Google recently announced it would unveil a series of new hardware devices. For those who are unaware of what has happened, Google unveiled two new smartphones called the Google Pixel and Google Pixel XL. They also unveiled Google Home, which, based on videos, seems like a device that looks like a lava lamp that you put in your house and talk to. Then there is Google Daydream VR, which is a virtual reality headset to rival e.g. Oculus, HTC Vive, etc.

While these products are not out yet, all in all, I must say that I am very underwhelmed. The Google Pixel phones are quite bland, boring, and expensive, and it’s disappointing that Google is discontinuing their Nexus program. 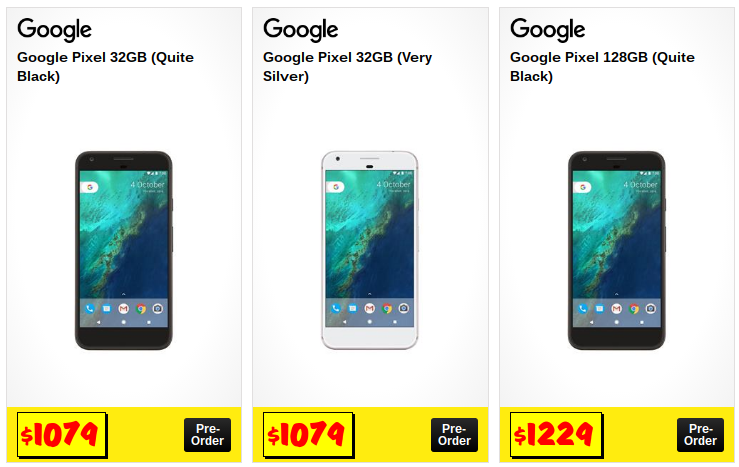 Being used to paying A$400 for a flagship phone to all of a sudden paying over A$1000 is going to get some getting used to for Nexus fans.

Of course, the Google Pixel phones will be well equipped. Supposedly the Google Pixel phone has the best camera in the world. They will also be equipped with the latest Qualcomm Snapdragon 821 processor as well as 4 GB of RAM, which should make it quite fast. Whether it will be faster than the current fastest phone on the market (the Galaxy Note 7) is yet to be determined. Nevertheless, the Snapdragon 821 is the latest and greater mobile processor from Qualcomm, and based on my history of buying smartphones, Qualcomm make excellent processors, so I’m confident the Pixel phones will be fast.

But this is not what worried me. My old Nexus 5 (2013) still uses an old Snapdragon 800 processor and is still quite fast, more than enough for my needs. Speed on a smartphone is not that important unless you play lots of games, and if you’re playing lots of games, why play it on a smartphone? You’re better of getting something that is actually meant for playing games, such as a proper gaming computer or a Playstation 4.

Another unfortunate fact about the Pixel phone is that it is not waterproof and it does not have expandable storage. If you’re going to pay big money for a phone, you want it to have features that match with expensive phones, and currently the only brands that have both waterproofing and expandable storage on their flagship phones are Sony and Samsung.

Although the camera is supposedly great on the Pixel, I personally don’t take too many photos, and I am not too concerned about camera quality. If I go on a holiday, I will wear my Narrative Clip 2, which means I don’t need to bother with taking photos while on holidays. I find going on holidays just to take photos quite strange and fake. I remember going to Asia some years ago and I was taking photos of an ancient temple because I wanted to create memories of my trip. But then I realized that there was no need to take these photos because, a simple Google image search can bring up thousands of these types of photos. Furthermore, if you take photos of other people, they behave differently. They pose and act fake. Many people don’t like to have their photos taken. This is why it’s better to just get a wearable camera to take photos automatically or, once technology advances enough, hopefully drone will fly around and take photos for us.

Another downside of the Google Pixel phones is that they actually look a little bit like iPhones, especially the bottom part. Many people say this is good because the Apple symbols is a status symbol that people want to show off to others, but I am certainly not a fan of Apple products. There seems to be no reason to buy them given that they lack features. You are able to get more features for the price if you buy other smartphones, so buying an Apple iPhone therefore just seems stupid. If someone were to use an iPhone and saw the the Apple symbol on their phones, I would actually judge them very unfavorably because they are likely superficial people who only look at brands and don’t actually do any research. People need to keep this in mind if they’re buying a status symbol because they may give off the opposite signal that they intended to give off.

Google Home seems even weirder because I just cannot imagine talking to a device. There’s nothing wrong with it. In fact, I often talk to my phone to set reminders while I’m out and about, when it’s usually when I’m alone because talking to your phone just seems like a weird thing to do, and I’d feel quite a bit of shame doing it in a room filled with people. It’s not just the weirdness of talking to a phone but there is also a privacy issue as well. Do you really want other people to know what kind of searches you’re going? Suppose you’re doing a search for cures to erectile dysfunction or testosterone boosters.

Google Home looks like it’s taking the same concept and applying it to the home. In the home, especially if you live alone, there is less shame.

The video above of Google Home being demoed in a home looks like a scene from a dystopian movie.

Google Daydream VR actually looks like a device that I may actually buy. Firstly, it’s really cheap coming in at US$79 (A$104). The big value add that Daydream provides, I think, is that you can use it while lying down in bed.

At work, you’re on your computer all day looking at a screen. When you’re on the train to an from work, you’re reading something on your phone. When you’re at home, you’re watching your TV. With many of these devices, especially laptops and smartphones, there are major posture issues. When using your smartphone, you’re hunched over.

Google Daydream VR, I think, will allow you to lie down on your bed and watch, say, Netflix or YouTube. Furthermore, because you wrap it around your eyes, you are not distracted by what is happening around you. Furthermore, there is privacy because other people around you don’t know what you are looking at.