I have created what I think is a formula for working out if it makes economic sense to buy an electric vehicle. You can find it below: 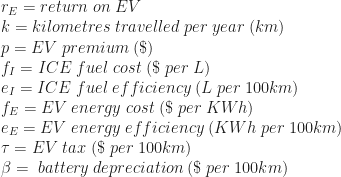 Explanation of the formula

The way to think about whether an EV is worth it or not is to consider the EV premium, which is the difference between the higher cost of the EV and the cheaper internal combustion engine (ICE) car. So for example, as of December 2023, the MG ZS EV costs $42,990 whereas the petrol version MG ZS is $21,990, so there is an EV premium of p = $21,000. When you pay for this EV premium, you are effectively putting this $21k into an investment that has a return (

) which needs to be compared to the return of other investments. For example, suppose you buy an EV and spend and extra $21k and from the fuel savings etc you make 3% per annum returns (

). If you believe that an alternative investment such as DHHF or VDHG has an after-tax return of over 3% then you would be better off buying the petrol MG ZS and putting the EV premium of $21k into DHHF or VDHG.

Another key consideration is battery depreciation. The EV premium is mostly a battery premium. The investment you are making is mostly in the battery. This battery has a return that you get from having access to energy in the form of electricity. Energy in the form of electricity is much cheaper than from petroleum. However, the EV tax and battery depreciation needs to be considered as well.

Because costs depend on the distance you drive, whether it makes sense economically to drive an EV strongly depends on how much you drive. The more you drive (especially over 25,000 km per year) the more it makes sense to get an EV whereas if you drive under 25,000 per year, it starts to make more sense to drive a petrol car.

I shared this formula on Reddit and received mixed reviews. Some people raised very good points that I have missed in the formula, but I think overall the formula above is useful to know whether it makes sense financially to purchase an EV or not. Below are some other considerations:

Other thoughts and considerations

The decision to get an EV or an ICE vehicle is very similar to whether you buy or rent a home. When you buy a home, you lock up a considerable amount of capital into the home. The benefit you get from living in your own home is that you don’t need to pay rent. If you buy your own home and then rent goes up significantly, you are better off. Similarly, when you buy an EV, you lock up capital because of the added cost of the batteries. However, the benefit you get from EV ownership is that you pay significantly lower energy costs. If you buy an EV and petrol prices go up, you are better off.

We also need to think about the future. Currently the break-even point is about 25,000 km. If you drive more than 25,000 km per year, it is highly likely you should buy an EV. However, if battery technology improves, petrol prices go up, and electricity prices go down, the break-even point will go down. There is also huge risk that an ICE vehicle you own may become a stranded asset if government policy aggressively addresses climate change. In my opinion, it is more likely that electricity prices will go down and petrol prices go up rather than the other way around. Electricity comes from multiple sources e.g. solar, wind, nuclear, and even gas, oil and coal. However, petrol only comes from oil. As such the supply of energy sources that can create electricity is much higher than the supply of energy sources than can create petrol, so higher supply should result in lower prices for electricity as an energy source.